After surveying my kitchen for the umpteenth time, I have decided to add a new feature to my blog called "What my dog ate today". We have two dogs, and we live in a 120-year old house (The debate continues to rage with me and the wife as to whether the house is "historic" or simply "old." I contend that nothing of historical importance occurred here so the house is simply old. She seems to think that the mere fact that it is old makes it historical. Maybe she's right, but I don't think so.)
We are expecting a child in April and a kitchen/bathroom/sunroom remodel is scheduled for February. We generally lock the dogs in the sunroom during the day while we are at work, though when we are home we let them roam in the kitchen while we do chores around the house. More often than not, when we get home something has been destroyed. Sometimes its hard to tell which dog committed the offense, though not always. This new feature will highlight the things that they have destroyed pictorially along with the appropriate commentary. 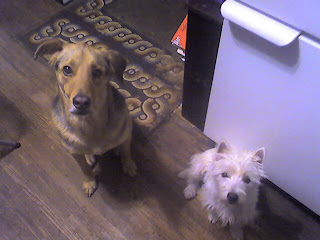 Here is the first installment of the things that I have remembered to photograph:

The bag of shoes for Goodwill: 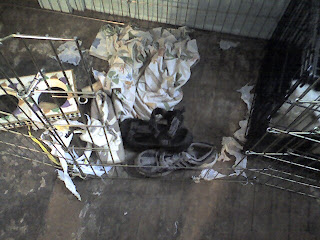 In case you can't see it, there are three different shoes, plastic bag, and a torn up sheet.

There are lots more things. I just need to commit to photographing them to share them with the world.

Other news: Firefox has an awesome add on called ScribeFire that opens a window to blog in while you are reading an article on line. Cool stuff. Check it out.
Posted by LatinTeacher at 11:40 AM 2 comments:

Every year, one of the things I look forward to is the OffBeat Top 50 Louisiana albums/CDs of the year - partly to see how well I did buying this year, partly to disagree, and partly to say, "I didn't know he/she/they released an album/CD/EP.
This year, I did pretty good in that I have the Galactic and Tab Benoit CDs from this year, both of which I love.

I don't always agree with their picks, and I would like to disagree with their choice to exclude Lucinda Williams and Mary Gauthier from the list. They discuss New Orleans and Louisiana in their songs, and they do so from a different perspective from people currently in the industry in New Orleans. Just because we move away does not make us Louisiana. Its influences last a lifetime.

I didn't know that Anders Osborne had a new CD, or Bonerama, or Joe Krown. I did know the Subdudes had a new CD, and I will be buying that ASAP at Louisiana Music Factory. Maybe Supagroup, too.

Happy Listening!
Posted by LatinTeacher at 5:34 PM No comments:

It seems to be that time of year - when people with the best of intentions make an effort to improve their lives as the calendar turns, hoping that this year will be different/better/more meaningful than others. I have tried to make resolutions in the past, and I really seem to have a great deal of difficulty sticking with them. But this year there is a baby on the way. My life is going to be really different no matter what, but I still have some personal goals that I feel I must achieve in order to make my life more complete.

Here is the partial list:
Nothing on my list is obscenely difficult or out of the realm of possibility. I tried to keep everything concrete so that I can see them take place. One day I will get my printer fixed so that I can print this up and look at them frequently.

I can't believe what I read in the USA Today.

With the spotlight on New Orleans (such as it is), the media is more capable of showing the city warts and all. Perhaps this most recent poll is a needed shot in the arm. I, for one, think that we New Orleanians are desensitized to all the crime and murder. As long as it doesn't happen in our neighborhood or on our block, we just assume that its gangbangers or drug dealers killing each other over "turf." And we turn a blind eye. Every once in a while a Helen Hill or Dinerral Shavers innocently becomes a victim, and we decry the ineptitude of the "system" for a few weeks.

The truth is that the system is broken, crime is rampant, and the solutions are more complicated and costly and deep-rooted than we can fathom. It will take years of remediation and consistently excellent effort to make lasting change. At this time, it does not seem that we are on this path. Lots of us have ideas on how to improve the world as it relates to New Orleans, but until the leaders get on board with these ideas, begin to implement them, and follow up when needed, the out of control spiral will continue. To simply say, like Mary Beth Romig states, that "All we can say is, statistics continue to point to the fact that much of the crime is taking place in historically crime-ridden parts of the city" is not acceptable. Crime in any part of our city is bad. We simply can't turn a blind-eye to where the crime is occurring.

Everyone who is killed or is a victim of a crime is someone's son or daughter. And each killing and crime effects us whether we like it or not. From this point forward, the crime will effect New Orleans financially. Maybe that's what it takes to get the city's attention. Who wants to visit a war zone on their vacation, even if the food is divine and the attitude laid back?

But it boggles my mind that Americans, our fellow countrymen, (33% of them) think the French Quarter was one of the most severely damaged parts of the city. But even more frustrating and unimaginable is the 26.5% who still thought some parts of the city were flooded.

New Orleans has a real chance to fix some of the things that are wrong with it - 30+ years of neglected public education, a broken housing system, and a laundry list of other urban ills. I don't care where it starts, as long as it starts happening soon.

The Sugar Bowl, the BCS Championship, Mardi Gras, and the NBA All-Star game are coming soon. The sports media loves New Orleans, and they take the opportunity to highlight positives. Mardi Gras is its own press release for New Orleans. I think New Orleans needs to take advantage of the positive press in the next few months and make lasting, meaningful changes; changes it must make to continue to right generations of wrongs and continue to be a world class city.
Posted by LatinTeacher at 9:56 AM No comments:

I don't subscribe to the USA Today, but I have been noticing that they seem to have tons of articles that continue to focus on New Orleans. Just for this reason, I may begin to get it. In today's paper, I saw this article. While money itself ($17.5 million) will not fix the issues with New Orleans schools (or the aftermath of the Federal Flood), the organizations that received this grant money will be able to. Among the groups receiving funds are Teach for America, New Leaders for New Schools, teachNOLA, and New Schools for New Orleans. Among the donors are Bill and Melinda Gates, Eli and Edythe Broad, and Doris and Donald Fisher.

My hats go off to them. Thank you for helping make a difference.

However, what about the RSD schools? Do they get any of the money or does it simply go to schools run by these organizations? Then what?

It looks to me like this is beginning to be a two-tiered system.
Posted by LatinTeacher at 12:34 PM No comments: