I just left this comment (with slight edits so it makes some sense) at Rick Blaine's blog post about the Saints. I don't know if everyone else feels this way, but I do.

This season is important for the people of New Orleans. The fever that this team is bringing is palpable. No one says goodbye any more, they say "Go Saints!" I just spent a week down there visiting my mom and brother. That's what the weekend revolved around, and the week was spent in anticipation of the game. The front page of the paper top headline on Christmas day was "Saints clinch bye week". The rest of the country can like the Saints. They should - they are a likable team. And if it makes them feel better to root for the Saints this year, hell, let 'em. If they want to come visit, gut a house, and spend some money in the great city of New Orleans, bring it on. But they can't have them forever. Next time they have an awful season, I will still be a Saints fan. And they can all go suck Jerry Jones off again.
Posted by LatinTeacher at 8:57 PM 3 comments:

What I Really Want for Christmas

So I was leaving town, heading back to Pennsylvania (ugh. I know.), and I stopped at a gas station to fill up wearing my brand new Saints sweatshirt (my Christmas present to myself - Merry Christmas ME!). The woman in the store was wearing her number 25 jersey. I complimented her on her taste. Her only response to me - "Black and Gold Superbowl!" in the best New Orleans accent ever. It even rhymed. I love New Orleans. And the Saints. Coming soon - my updates on my trip.

PS - Oh yeah, I am kinda thinking of starting a new blog because after a conversation with a friend (discussing ways to move back and possible career choices), I need to maybe lay some ground work. Here is the first installment. These things take time. I think I may need to be more critical if I want it to work, but there it is for now.
Posted by LatinTeacher at 8:07 PM No comments:

After a great day at the track (Saint and Sinner placed in the second!), I was at a wonderful dinner at LA Thai on Metairie Road tonight. I met a friend's new significant other, and I realized something horrible - I can't talk about anything other than New Orleans. We talked about how Bill Jefferson was re-elected. I don't know how. We talked about Jefferson's connections to Renee Gill-Prat and CARE Unlimited. We talked about how there is no more recycling program. And how it's the same families with the real power and the puppet politicians. (John Barry really has this right in Rising Tide, IMO.)

I love my hometown. I really do. But I realize that everything around here is totally screwed up. So am I. I acknowledge that things need to change. But as I got home, I realized something else - there is so much corruption and there are so many things here that could easily be changed/fixed/improved that it's overwhelming to know where to start. It was like that before, too, but now it's become nearly impossible to see the forest for the trees.

The realization, the epiphany is this - as long as you can keep people focused on their daily struggles, they won't have the time or inclination to protest the atrocities. The reality is this - those entrusted to run New Orleans need to use their power for the good of the people and not to line their own pockets and scam the good people who put them in power.

Hurricane Katrina and the resulting federal flood have served not to bring out the best in those who have the means to improve our city. Instead, it has served to bring out secret handshakes, shady backroom deals, and selling out our city to the highest bidder. So few people in political power seem to have the actual future and revitalization of New Orleans in mind that it seems incredulous to me.

I would love to see something in Ray Nagin change. I believe him to be a good man. I believe him to be overwhelmed. But, more importantly, I believe him to be the wrong man in the right place at the right time. At the end of the day, he is going to be the one that people remember was in charge of the rebuilding. He needs to ask himself - how does he wish to be remembered by New Orleans? By Louisiana? By the rest of the US and the world?
Because right now, the view isn't very positive.
Emotion will only take you so far. Right now, I am angry. I hope my opinion changes later.
Posted by LatinTeacher at 10:49 PM 1 comment:

I know the FBI is probably already working on this, but I keep reading about "Dollar Bill" Jefferson, his family, and his network of cronies. While he may be above the nonsense, I doubt it. I am not sure that Carter is absolved in this matter either. There will be flowcharts, Venn diagrams, names, dates, and other important stuff. How in the hell did he get re-elected? I hope he gets indicted just on appearance. At least until I get this information together. Then I hope he gets indicted on facts.
Posted by LatinTeacher at 8:02 AM 1 comment: 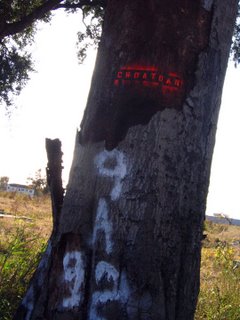 Editor B had a great post about "Guerilla Art" in Mid-City a few weeks back. I was showing a friend how cool this stuff was, and his update led me to the art in action blog where, so far, twelve installations have taken place across New Orleans. While all are interesting and cool to me, I find Site #8, Tennessee Street in the Lower Ninth ward is the most interesting. Croatoan was painted all over the dead oaks that lined the street. If you haven't driven through the Lower Ninth, you should. It feels like a lost and desolate outpost, abandoned by the world, doesn't it? I will be there in a few weeks to go check on a few of these in person.
Posted by LatinTeacher at 11:48 AM 1 comment:

C Ray Nagin has hired a disaster recovery specialist. Finally. Maybe he needed a little more time to figure out that what he was doing was nothing. Edward Blakely has helped in a lot of American cities that have been damaged by nature (California wildfires and earthquake) or humans (New York 9/11). Best quote from the article - "...After being in (places like) the Congo and so forth, this looks great," he said.

Now, Mr. Blakely, let's get this ball rolling.
Posted by LatinTeacher at 5:27 PM No comments:

I was watching the Saints game last week as my mom was visiting from New Orleans. I go downtown to the Circle in Easton and watch the games at a sports bar where I met a guy who lived in New Orleans for 15 or so years and is still a Saints fan. Trust me, there are not a whole lot of us outside of the New Orleans and Gulf Coast region. As we were getting ourselves all worked up about the Atlanta game and being the eternal optimists that we all are, we started talking about the Saints and the Super Bowl. My new friend Tim says, "If the Saints win the SuperBowl when it's in New Orleans, it's gonna make Mardi Gras look like a Monday." GO SAINTS!
Posted by LatinTeacher at 9:55 AM No comments:

I am concerned. I am worried. The state takes over and the problems are still the same. Is there corruption in the New Orleans Public School System? Absolutely. Is it going to go away any time soon? Looks like the answer is no.
While everyone can agree that the situation is dire for New Orleans Schools, there are far too few voices that decry its failure for the last 30 years. I do not have answers, but I sure have a lot of questions. Where are the books? Dr. Ashley proposes computers. Infrastructure problems. No air conditioning. Paychecks for absentee workers. Unearned pay. At what expense? The children?
The way to a strong economy is an educated populace. Poverty or not, the children of New Orleans deserve an education worthy of a world class city. As an educator, I am appalled. I am proposing for myself that this blog shift focus to become one of the voices for change. It is necessary, and it is time. If not now, when? Someone needs to hold the people in charge accountable. Might as well be me.
Posted by LatinTeacher at 7:20 PM No comments: