How are you? How are things down there? I know you are devastated and feeling lost, but I want you to know that I think of you fondly and often. I feel sad for you. There is no way I can comprehend the pain and suffering you are going through, the despondency, the hopelessness and helplessness. I suffer here, too, in my own quiet way. But your silence is vast and incomprehensible. There are dark secrets behind your fun-loving veneer. Those of us who grew up nearby know some of your past, but it seems as though many of your secrets will be secrets forever - lost or forgotten or ruined.
I know you are doing your best to recover. They say that the healing takes a long time. But each day gets easier. Keep up your spirits, take the high road, think big. It's not easy, but I know you can do it. I have known you all my life. You are resilient and strong-willed, tough yet nurturing, focused but aloof.
We may not say it nearly enough - we love you. You are important to us. We want you to get well and be strong and prepare for the next time. If you can't do it for us, do it for yourself. Whatever you do, don't give up hope. There are lots of us who want you back stronger, better than before. And we know you can do it. We pray for your recuperation daily. Did you know that? Everyday we think of you and pray for your survival and well-being. You can and will beat back this setback.
Take this opportunity to fix the wrongs you did to those who loved you. Give them a chance to come back and welcome them with open arms. Forgiveness is powerful. Sure, you did somethings wrong. Who doesn't? But fixing those wrongs is a big deal and a big responsibility. I know it's tough, but try. Some people need to hear from you that you did wrong, but you are going to try and do better next time. Maybe they will forgive you and try to do better, too.
I hope that I wake up one day and this is all gone away. I know it won't be, but I do hope. And there are a lot of other dreamers out there, too, hoping for the same thing. We love you, we miss you, we want only the best for you, and we hope that things get better for you soon. You deserve it.

Thinking of you,
Stephen Mitchell
Posted by LatinTeacher at 12:26 PM No comments:

Interesting, but I am not sure I see all that is being mentioned in the commentary. I understand it, but I don't see it.
Posted by LatinTeacher at 9:04 AM No comments:

Just watching the basketball game between NJ and Miami on TNT. As they were interviewing Gary Payton, Cowboy Mouth was playing in background (Trouble Looks Good to Me). 8:45 PM. Does anyone out there know who chooses the songs? Whoever it is apparently has good tase.
Posted by LatinTeacher at 8:49 PM 1 comment:

My mom told me about this (although I had already read it). Looks like her house flooded around 10:30 AM. And now, only 9 months later, her house is almost back to normal.
Posted by LatinTeacher at 7:39 PM No comments:

This intrigues me. Because I wonder if there is a lot of second guessing at this point. I mean, when the WTC was attacked, people broke down each second of the days and weeks and months leading up to the attack to see if there was anything that they could have done to prevent it. In this instance, something was done. It was done incorrectly and with possible ethical implications just like everything else in New Orleans (or so it seems to the outside world). My questions regarding this are multiple. a) Why did it take until 2004 to think about disaster communications? b) How did the municipal government decide on "Exos Communications" in Denver to deliver the product? c) How did Holcomb decide to invest in said company? d) If all the other pieces had fallen together so nicely, why didn't anyone just ask Holcomb to either step down or sell his stock? e) What is "chief scientist" and can I become one? f) Would any of this truly have made a difference? g) If the "chief technology officer" (and can I be one?) can break into an Office Depot and make a "wi-fi cloud," do we really need $7 million and a communications company in Denver to do it for us? Or did he get directions from Microsoft?
So are we communicating yet?
Posted by LatinTeacher at 7:25 PM No comments:

Before he died in 1991, my dad was a doctor and professor at Tulane Medical School and he died at Tulane Hospital. He didn't practice medicine in a clinic, so I never remember him being on call during hurricanes. I just know that the way things used to be, we never left town during the threat of a hurricane. In any case, I used to work with him over the summer, my mom started working there again after my dad passed way, and I still feel like Tulane Medical Center is part of me in some way. I am reading this 22 part series from the Atlanta-Journal Constitution about what happened there and at Charity during Katrina. Well done, Ms. Hansen.
Posted by LatinTeacher at 9:56 PM 1 comment:

So, the SBA, where people have been directed after being refused for FEMA loans, has no idea what it means to cut red tape. Unbelievable. Did they not get the memo? Or watch the news? So, uh, yeah, Peter, we're going to need you to come in on Saturday. Except you are a civil servant so the rules don't apply to us or to you. Nice work, fellas. You really seem to have your finger on the pulse of the country.
Posted by LatinTeacher at 9:13 PM 1 comment:

Quote of the Day

John Kerry said this about the SBA (and every other federal agency as far as I am concerned) - nola.com:

"The record is obviously disastrous," Kerry told small-business owners. "The government ought to be working spontaneously, willfully and effectively for people, not slowly and begrudgingly and reluctantly.

"It's that simple. And it's not the impression I've gotten from anybody I've talked to today."

I would add that I haven't gotten that impression from anyone. Period.
Posted by LatinTeacher at 8:36 AM 1 comment: 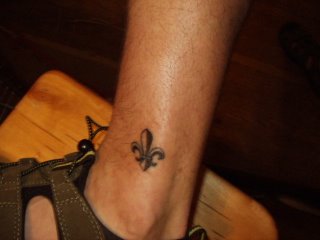 As I have returned to PA from another trip to New Orleans, I have thoughts.

A) Things in New Orleans are still bad. I feel guilty to have been there at JazzFest because I know there is so much to be done on the one hand. On the other hand, the economy down there needs an infusion of money and the best way to do that in New Orleans is be a tourist and spend. Which makes me think that having a tourism based economy is a bad idea. A region of this country with so many natural resources (oil, river, natural gas, fertile ground, etc.) shouldn't rely so heavily on something so fickle as the tourist dollar. However, we do know how to throw a party and invite everyone which we should exploit for our financial benefit. On the other hand, it seems to me that the major amount of dollars spent goes to some multinational corporation with little or no interest in helping New Orleans (airlines, hotels, Miller Brewing, etc.) So am I fighting against myself here?

B) On nola.com yesterday, current Mayor Ray Nagin has presented a plan to evacuate those with no other way out. Good for you, mayor. Are the people that couldn't evacuate back? And he also decided that there will be no "shelter of last resort." My friend Brian said that that shouldn't have existed a long time ago. So did most other people I know. So now people have to start creating a plan. I wonder if all the close calls made people think that the city government was crying wolf.

C) The people of New Orleans are so creative and have such humor in the face of this tragedy that I feel the need to recall the best t-shirts I saw at the JazzFest.
Top 5 -
5. F(fleur de lis)ck FEMA
4. Defend New Orleans
3. I (fleur de lis) NOLA
2. I survived Hurricane Katrina and all I commandeered was this lousy t-shirt.
1. A t-shirt with a waterline halfway up it that said "I've had it up to here" with an arrow pointing to the water line.

I know I saw more than this, but these were the ones that I can remember here at work at 7:20 AM.

D) Driving across New Orleans from Carrollton to Magazine Street along Palmetto, Toledano, and Louisiana, it looked just the way it did for the most part as when I came down in October. Other parts like Mid-City and parts of Gentilly near the Fair Grounds (Esplanade Ridge?) seem to be making a better go. But I only saw little bits this time. I met a guy at Lucky's on Sunday night. I tried to explain to him how bad things were in St. Bernard and New Orleans East. I don't think i have the vocabulary.

E) I didn't get to see all my friends. I need to go back and take care of that.

G) Mom's house is almost finished. My brother had some guys over there painting the last coat of paint on the bead board. It has carpet, newly installed hardwood floors, and two full bathrooms. It feels like a house again.

H) Turncoats on Magazine. I asked to buy a print of some shopping carts from walmart back in January. The artist/photographer had gone around and taken pictures of them wherever they ended up after the storm and the looting of Wal-Mart. The guy took my phone number and never called me. I am not sure why he never called me. I spent a good bit of money in there. So I went to get my friend a "Defend New Orleans" shirt on Monday but the store, despite the sign out front, was closed. Does anyone know this guy? Despite feeling like I was screwed over, I would still like to give this guy some of my money. Is this business as usual? If so, maybe I don't want to give him my money.

I) Got a new tattoo. A fleur de lis. On my ankle. It is my best one yet. Thanks to the guys at Crescent City Tattoos on Magazine across from Le Bon Temps.
Posted by LatinTeacher at 7:18 AM 5 comments: